I partnered with Disney and ABC and was invited to cover the live taping of The CHEW at Epcot’s International Food and Wine Festival. However, all opinions are my own. 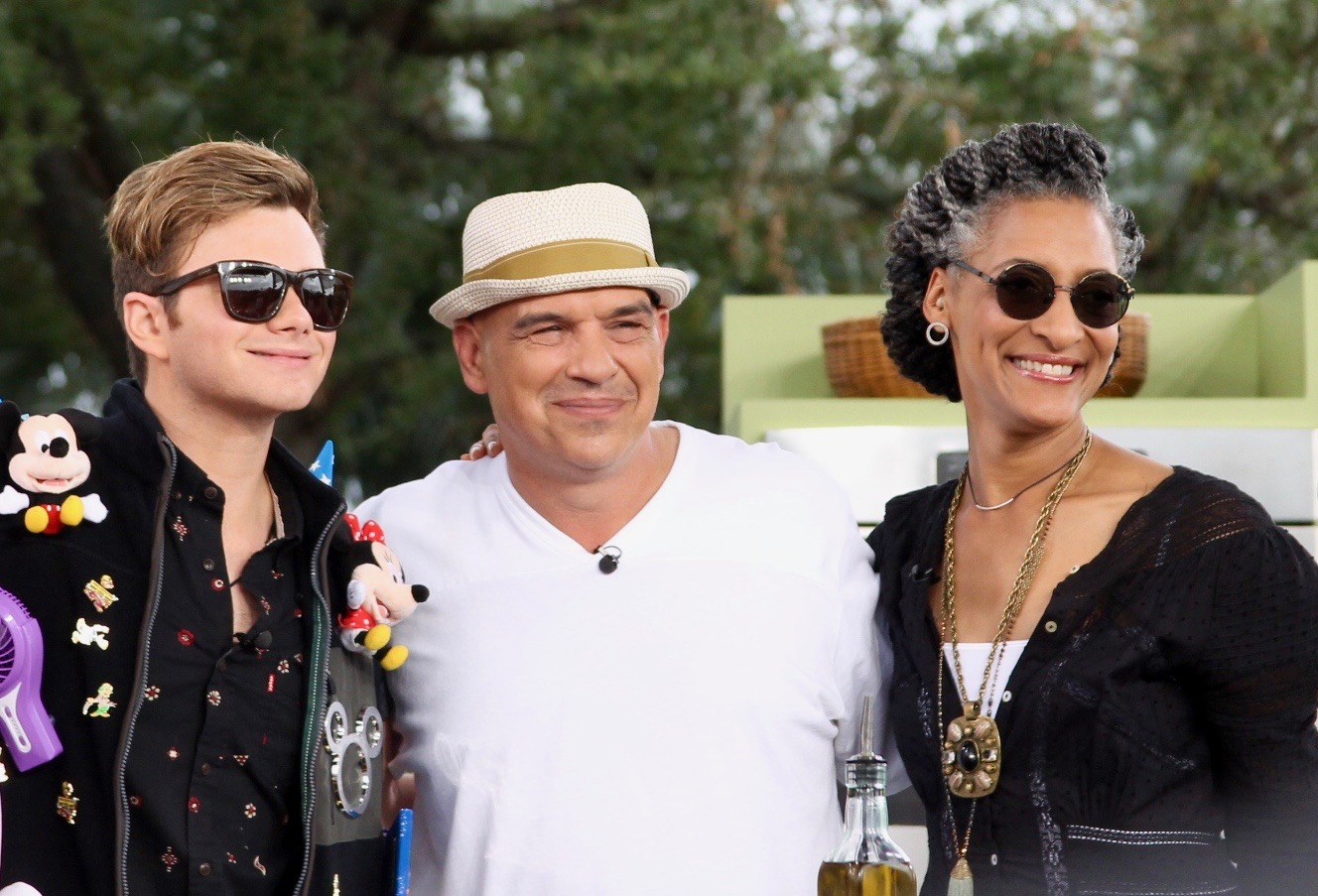 I am so excited to share with you all that this week my favorite cooking show, The Chew, is coming to you from Epcot’s International Food & Wine Festival. Every day this week ABC will be airing the episodes filmed last week at Epcot and each episode is filled with delicious recipes, celebrity guests and lots of Disney fun. Seriously, what could be better than The Chew and Disney together?!

Last week my daughter Ariane and I had the amazing opportunity to attend the live taping of The CHEW at Epcot’s International Food & Wine Festival. I was blown away at what a fantastic experience this was. It was so awesome to watch Carla Hall, Mario Batali, Michael Symon and Clinton Kelly on camera and behind the scenes as they created delicious recipes and shared their love for Disney. 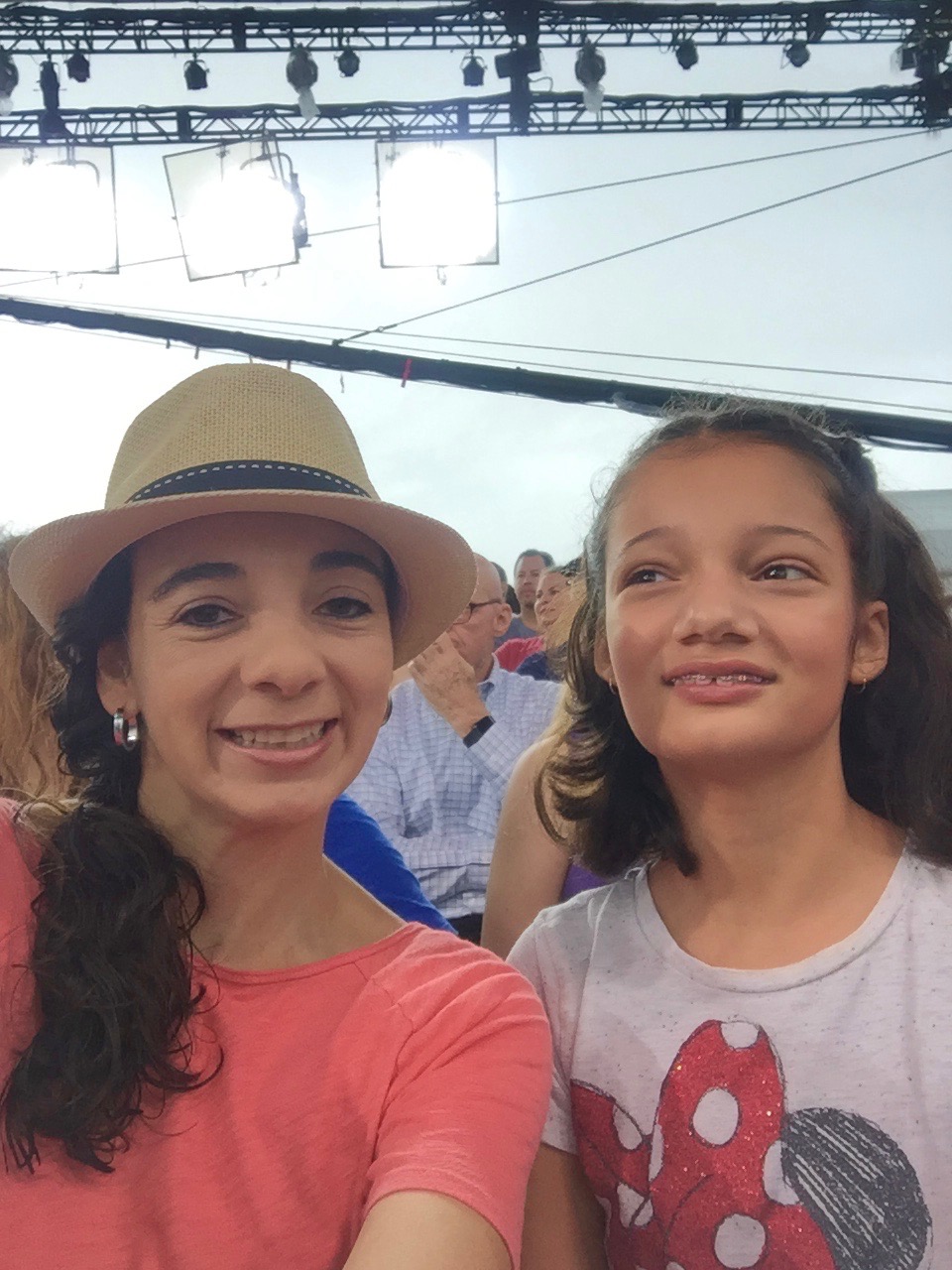 They are so much fun and all of them took the time to get close to the audience, say hi and of course, Carla Hall came into the audience and danced, because there’s always some dancing on The CHEW! 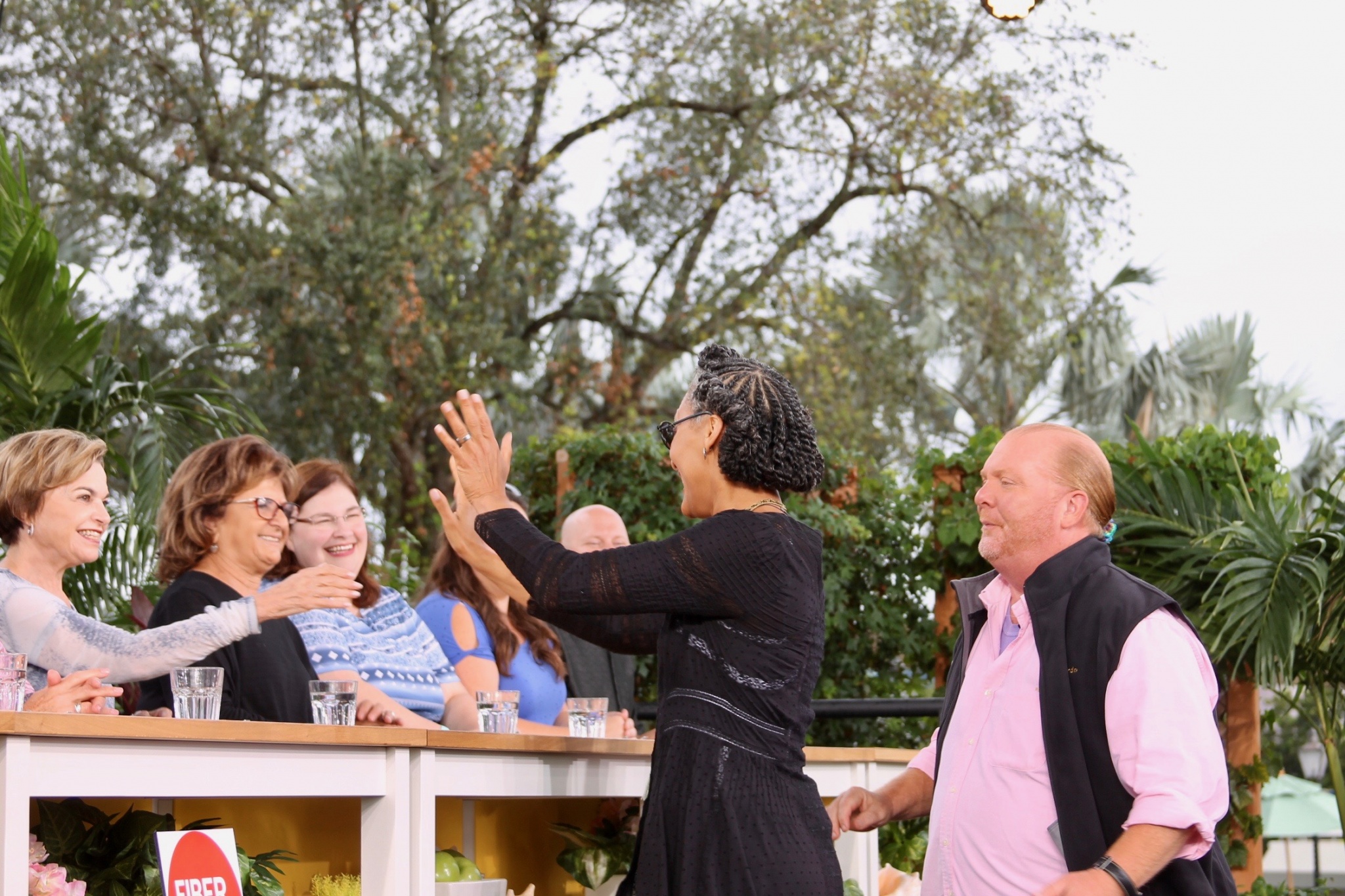 Initially, the Florida weather was trying to sabotage the show. It was pouring when we got there at 8:30 am and for a moment I thought that the show might be canceled but just before the live taping was scheduled to start the rain stopped. Before the cast came on stage R.C. Smith, the warm-up comic for The CHEW had the audience cheering, clapping, laughing and singing so by the time Carla Hall, Mario Batali, Michael Symon and Clinton Kelly came out we were all so excited and ready to cheer them on! 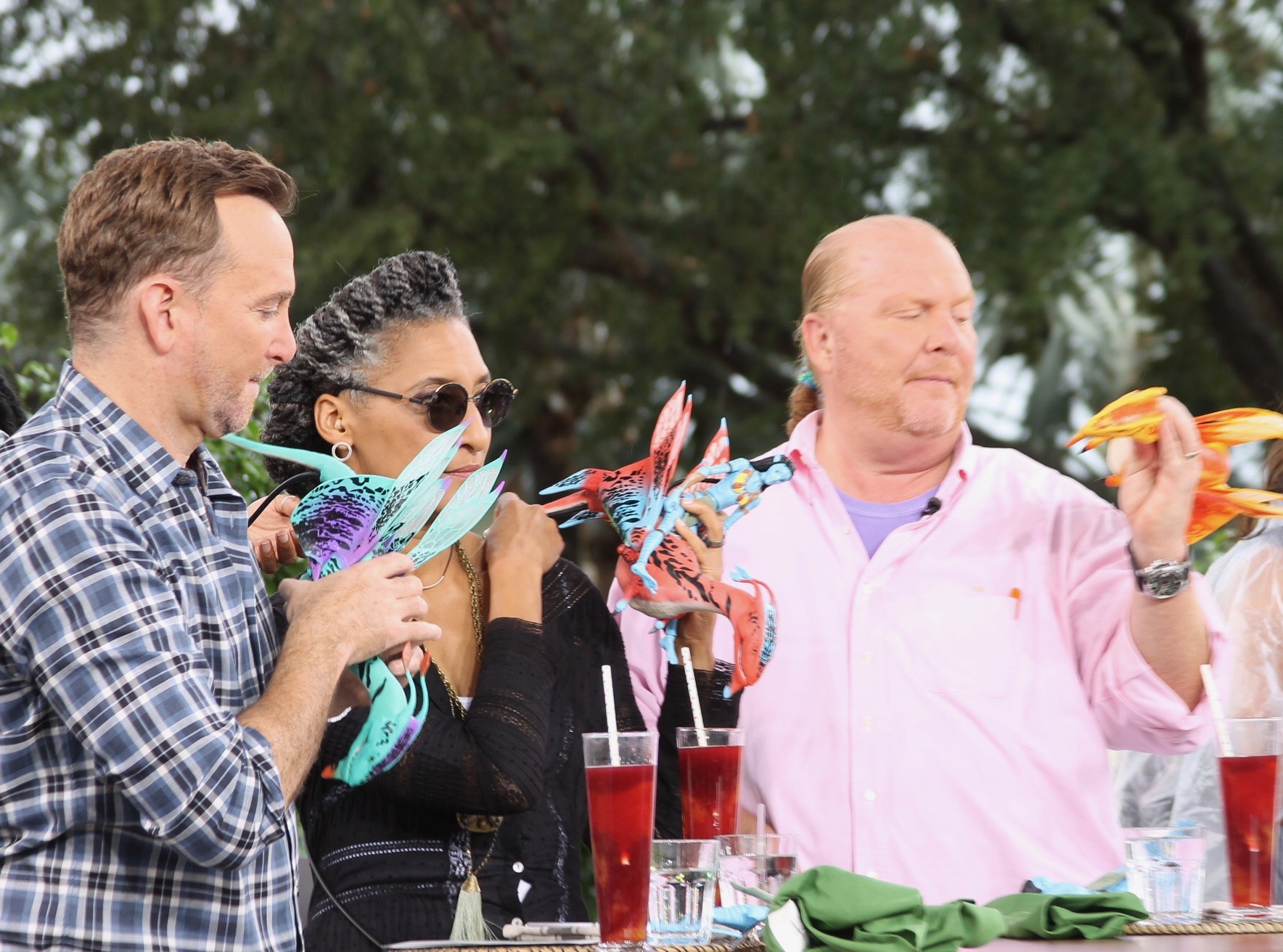 The CHEW’s cast came into the stage with Banshees from the Pandora – The World of Avatar on their shoulders. They got to experience Pandora and shared with the audience how much they loved it. I completely agree with Mario Batali: the Avatar Flight of Passage ride is an amazing and emotional experience you can not miss! After watching The CHEW taping we headed straight toPandora – The World of Avatar. Such a fantastic day! My girl had to adopt a Banshee just like the cast of The Chew. 🙂

During the episode, which will air this Wednesday, October 11th, we watched actor and author Chris Colfer from “The Land of Stories” as he joined Mario Batali to create a delicious and healthy dish. 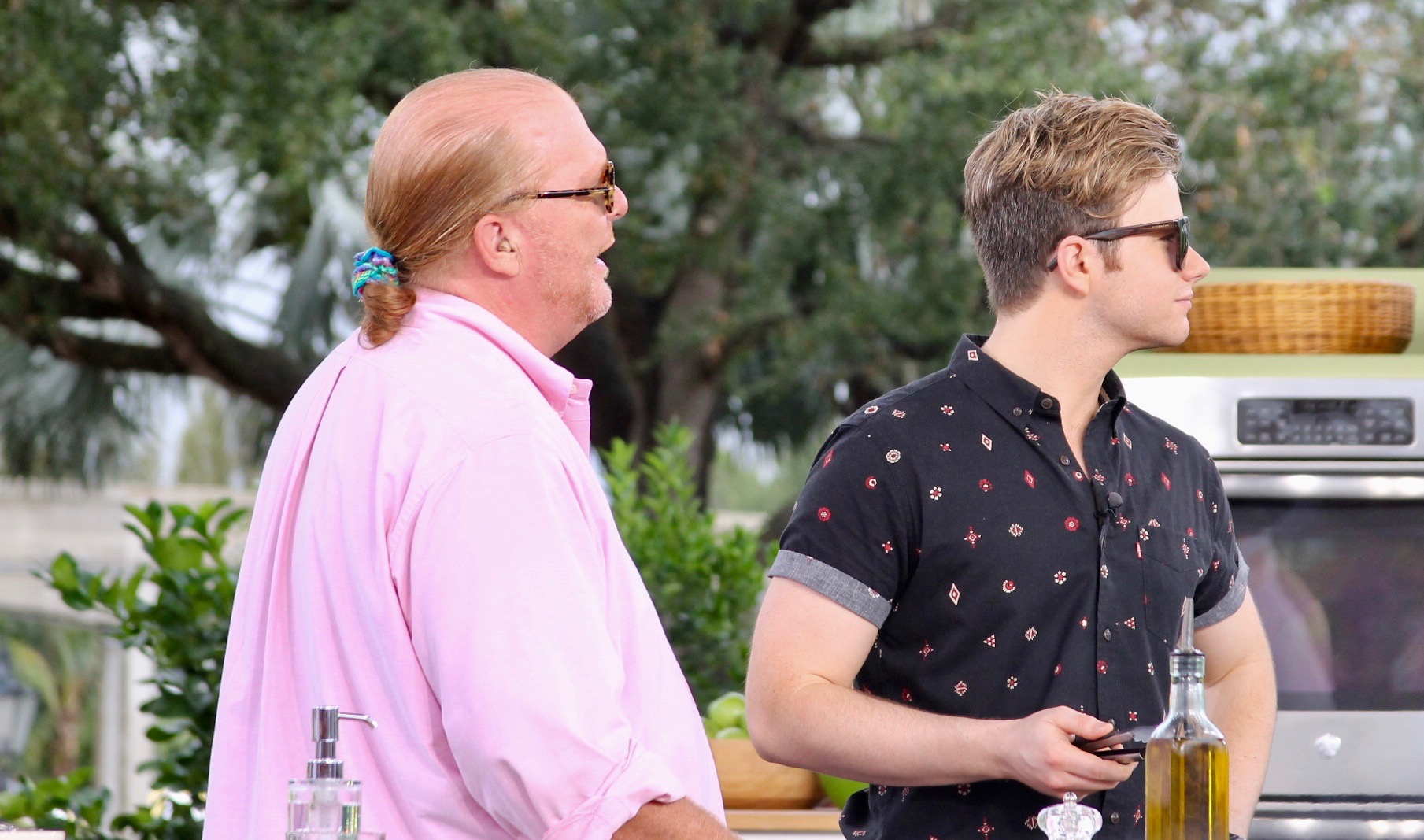 There cast of The CHEW teamed up with audience members to play a game called “Food Pyramid” which was a lot of fun to watch. 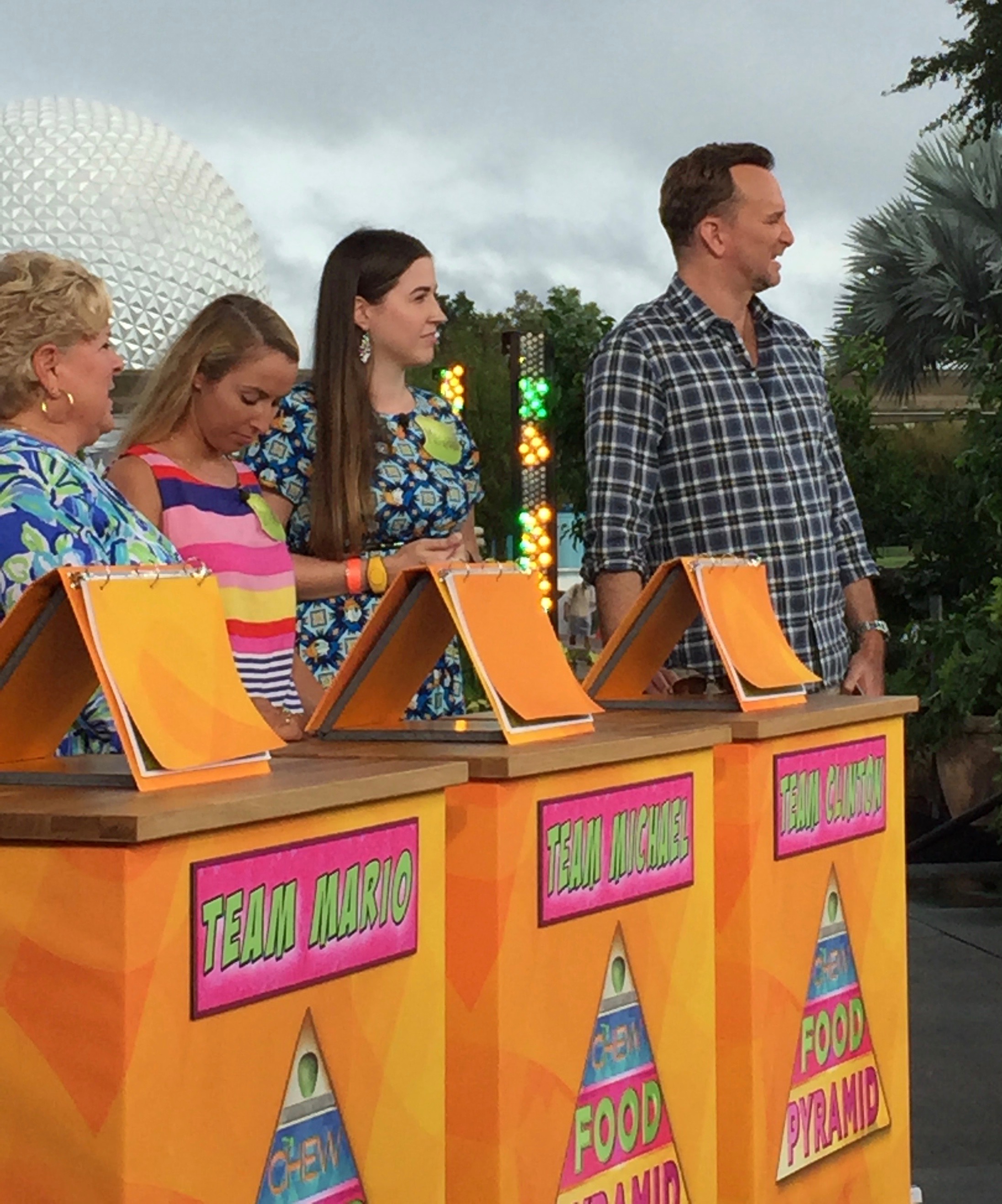 We were sitting in the second row, so close to the where all the amazing food was being cooked and the wind was blowing right towards us so we got to smell all the dishes as they where cooking and everything smelled amazing! I can not wait for the recipes to be posted on The CHEW website this week so we can try making this at home! 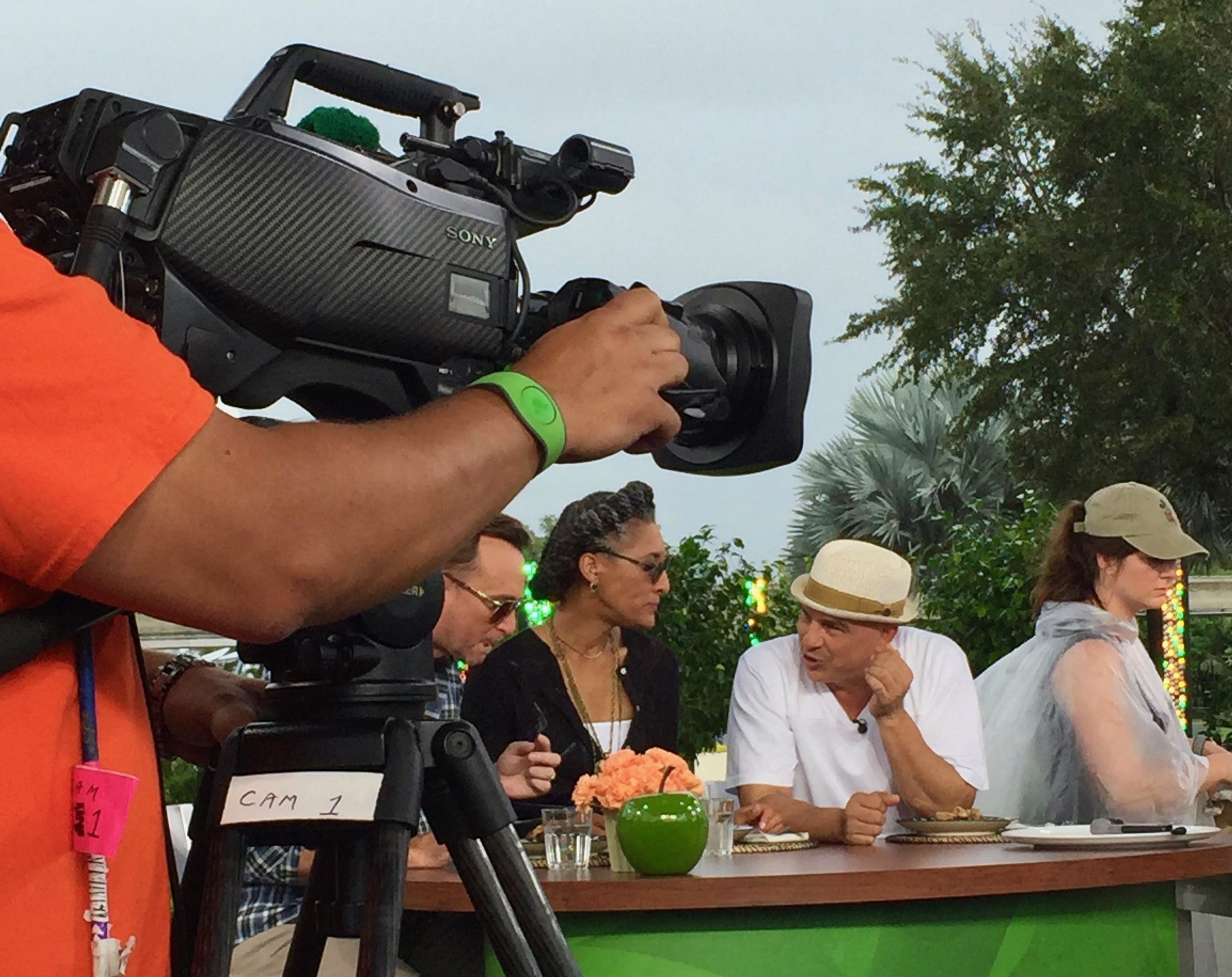 I love spending time in the kitchen and experimenting with new recipes and this is something I have always wanted to share with my daughter. Because she has difficulty with her fine motor skills and it’s challenging for her to do many of the things that are required while cooking she used to shy away from the kitchen. That was until she started watching The CHEW. There’s just something about the way that the cast of The CHEW share their recipes and cooking tips that got her excited about the kitchen. All of a sudden she started asking me to create some of the recipes that Mario Batali, Carla Hall, Michael Symon and Clinton Kelly where sharing on the show.  Now she loves to help me out in the kitchen and she looks forward to any day off from school and even to sick days just so she can watch The CHEW. Her favorite Christmas gifts last year was The CHEW Cookbook and her most prized possession is Carla Hall’s signed cookbook that I got her a few months ago at the Blog Her Food conference. She’s been talking about going to the live taping of The CHEW at Epcot for over a year now, ever since she found out that kids 10 and over could attend as audience members. You see, we tried going to a live taping in New York a couple of years ago but you have to be at least 14 to be part of the live audience and she was 10 back then. 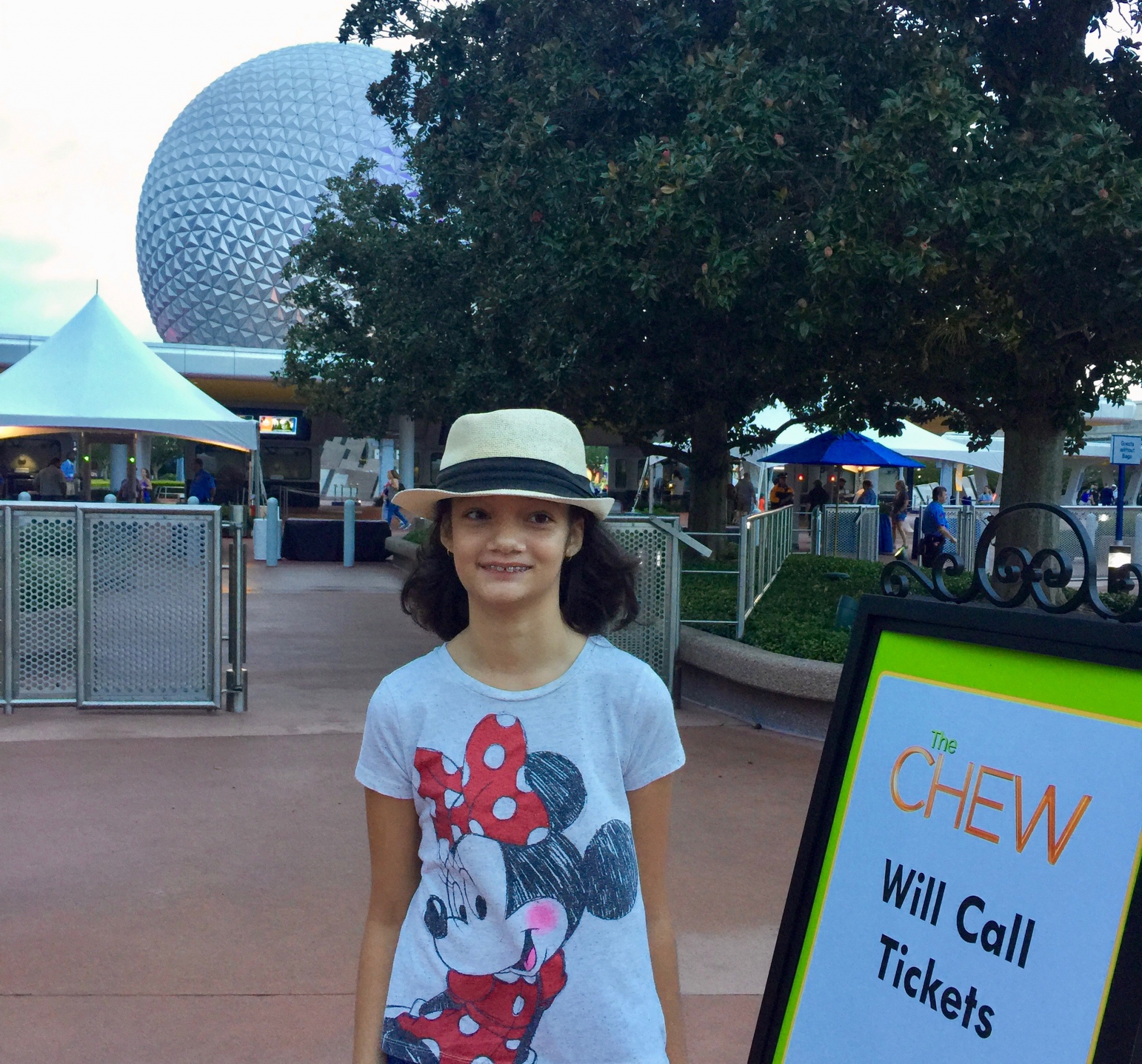 So attending the live taping of The CHEW at Epcot was truly a dream come true for Ariane and I am so happy that I got to share this with her! 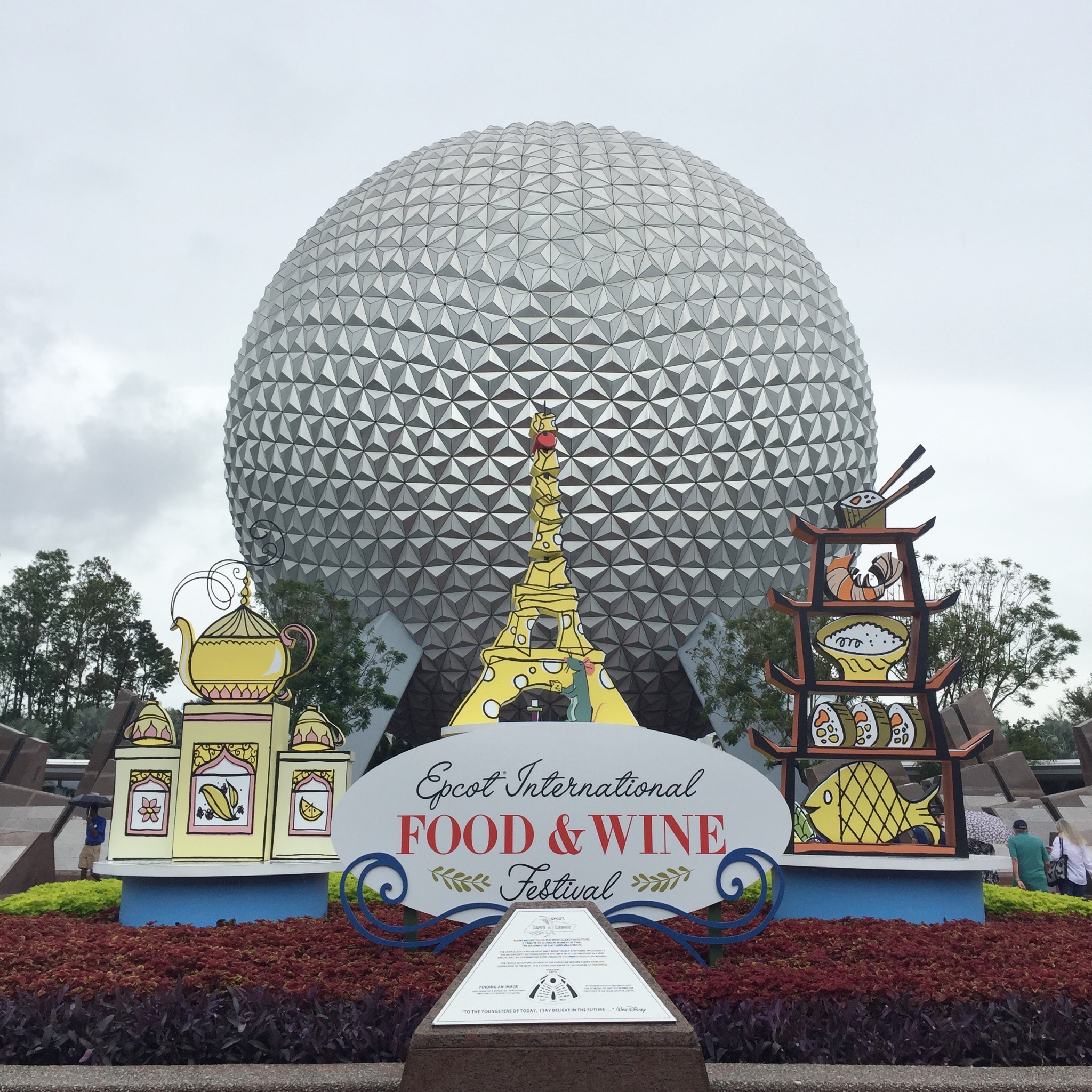 The CHEW Episodes This Week From Epcot!

Don’t miss any of the episodes this week but be sure and make a special effort to watch the Wednesday episode and you just might catch me and my daughter in the audience!

To learn more about Epcot’s International Food & Wine Festival check out the Disney Go website HERE and if you’re going be sure try the delicious dishes inspired by “The Chew” which are featured throughout the festival in the themed global marketplace, “Earth Eats, Hosted by The Chew.” The delectable CHEW recipes you can savor at Epcot’s International Food & Wine Festival include Grilled Beef Skewer with Romaine, Apricots and Feta Cheese; Ricotta and Zucchini Ravioli with Rustic Tomato Sauce and a sweet finish: Peanut Butter and White Chocolate Mousse with Caramel Drizzle. 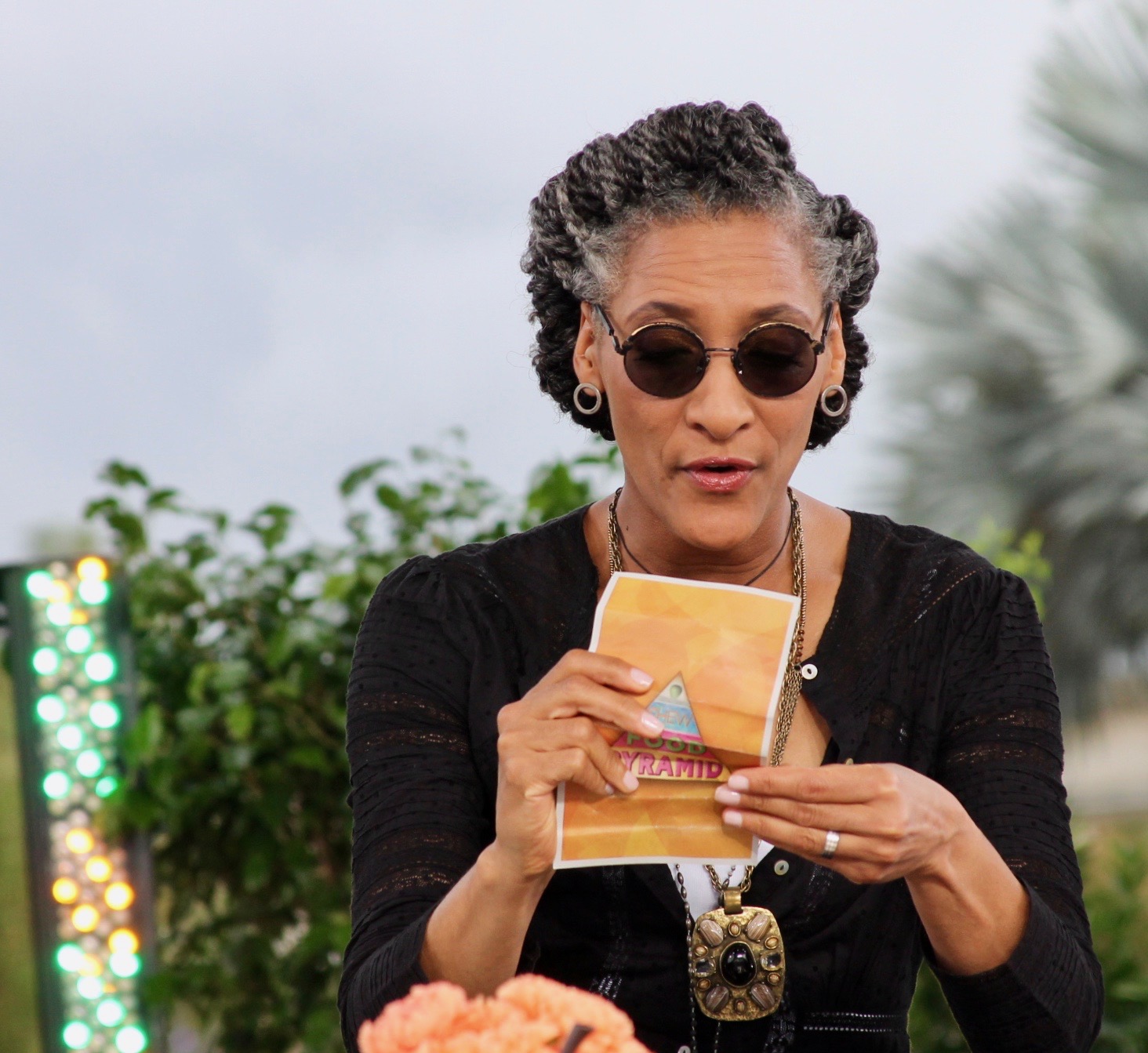 What to do and things to know if you want to attend a live taping of The CHEW at Epcot.

We’re hoping that The CHEW will come back to Epcot’s International Food and Wine Festival next year. If you want to attend here are a few things to know:

You can learn more about The CHEW and get some of their awesome recipes on The CHEW’s website HERE.