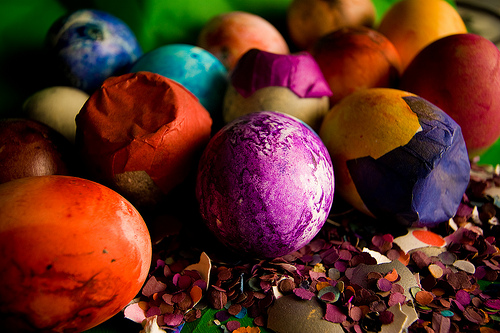 Carnaval in Guatemala, like in many other cultures around the world, is a tradition of religious origin, which is celebrated on Fat Tuesday, right before the start of Lent . In most parts of Guatemala we don’t have a huge celebration like Mardi Gras in New Orleans or Carnaval in Rio de Janeiro. Two exceptions are the towns of Mazatenango and Suchitepequez, where Carnaval is one of the main celebrations of the year and includes colorful parades, costumes, masks and dancing. Traditions vary depending on the area but in most parts of the country the main tradition is to use brightly colored eggshells or cascarones filled with pica-pica (confetti) and break them on other peoples heads. Carnaval in Guatemala is mostly a celebration for the children. It is a day to have fun and the last day in which you are allowed to be a brat before the Cuaresma (Lent).

When I was a little girl Carnaval was always one of my favorite holidays. Children dress up in costumes, much like kids in the USA do for Halloween, but you will see no scary costumes: kids dress as clowns, butterflies, faries and all sorts of animals and characters. There are usually small Carnaval parties in the neighborhood, in people’s houses and at the schools.

Carnaval brings such wonderful and colorful memories. For weeks and even months we would collect empty eggshells. All the children in the house would suddenly forget that they where usually picky eaters and ask for eggs for breakfast every morning.  I would go to the extreme of supervising the cooking process in the kitchen to make sure that when Papá was cooking he would not forget to save the eggs shells.  For them to be used as cascarones you have to be very careful and open the egg from the top leaving most of the shell intact.  A few days before Carnaval we would start painting the eggs with watercolors and markers, just like you paint Easter eggs but Easter eggs usually have a treasure or candy inside while Carnaval cascarones are mainly used as weapons.  Yes weapons! After painting the eggs we would fill them with pica-pica (confetti). To make pica-pica we would punch holes o sheets of colored tissue paper until our hands hurt but we would usually never have enough pica-pica to fill the eggs so we always ended up buying more. During this time of the year all the markets have huge baskets filled with hand colored eggs and with bags of pica-pica right next to the fruits and vegetables.   Once filled with confetti the hole in the egg is covered with tissue paper and the cascarones are ready.

At the Carnaval party all the children dressed in colorful costumes would smash the cascarones on unsuspecting victim’s heads which left your hair full of confetti and eggshells.  I have flashbacks of children running and chasing each other while the air was filled with laughter and joyful screaming and confetti covered the floor and children’s heads.  We did whatever we could to escape the cascaronazos as they hurt a bit specially if the egg hit your head pointed side first.

We move to the USA when my daughter was 3 so she still got to go to a couple of Carnaval parties but now most schools do not allow cascarones but only bags of pica-pica (confetti) which are much safer and just as much fun.  In private parties cascarones are still used but most parents instruct their children to smash the cascaron in their own hand before throwing it on other children’s hair to avoid sore heads.

This year we will head out to the park and have a little Carnaval party of our own, the children are excited about painting the cascarones and wearing their costumes.  Are you celebrating Carnaval or Mardi Gras?

3 thoughts on “Cascarones & Pica-Pica: Memories of Carnaval in Guatemala”