I have to admit that when I first planned my trip to Long Beach I did not know much about the Queen Mary.  As I research I was genuinely intrigued by the thought that a part of history, a piece of a bygone era, was now a living museum you could not only tour but could also stay the night at and I knew this was an experience that I did not want to miss out on.

The Queen Mary is a colossal ship: bigger, faster and more powerful than the Titanic.  Built in Scotland for the Cunard Steamship Company, the RMS Queen Mary first sailed in 1936 and until she was retired in the 1960s, she crossed the Atlantic 1,001 times.  In 1967 she was acquired by the city of Long Beach and she has been resting in the Long Beach harbor since.

This grand ocean liner was considered by the world’s rich and famous as the only civilized way to travel across the Atlantic. The Queen Mary hosted the Duke and Duchess of Windsor, Greta Garbo, Clark Gable, David Niven, Mary Pickford, George and Ira Gershwin, and Sir Winston Churchill, among others and held the record for the fastest-ever North Atlantic crossing.  Only 3 years after she set sail World War II broke out and she was transformed into a troopship and her passenger capacity was increased from 2,410 to 5,500 at one time setting the record for caring the most people ever on a floating vessel when she transported 16,683 troops.

I arrived to what would be my home for the night after a incredibly long day, I was exhausted, but as soon I walked into the lobby of the Queen Mary I felt as if I had just walked into a time warp and the excitement and awe as I walked the wood paneled corridors towards my room made me forget how tiered I was.  I though I would just  call it a night but instead I wanted to explore the wonderful vessel and learn all about it’s secrets.

As an architect I was in complete awe of the ship’s beauty; a perfect example of the industrial design aesthetics of the era.  The Queen Mary combines exquisite craftsmanship with the latest modern technology of her time creating beautiful and interesting art deco spaces. 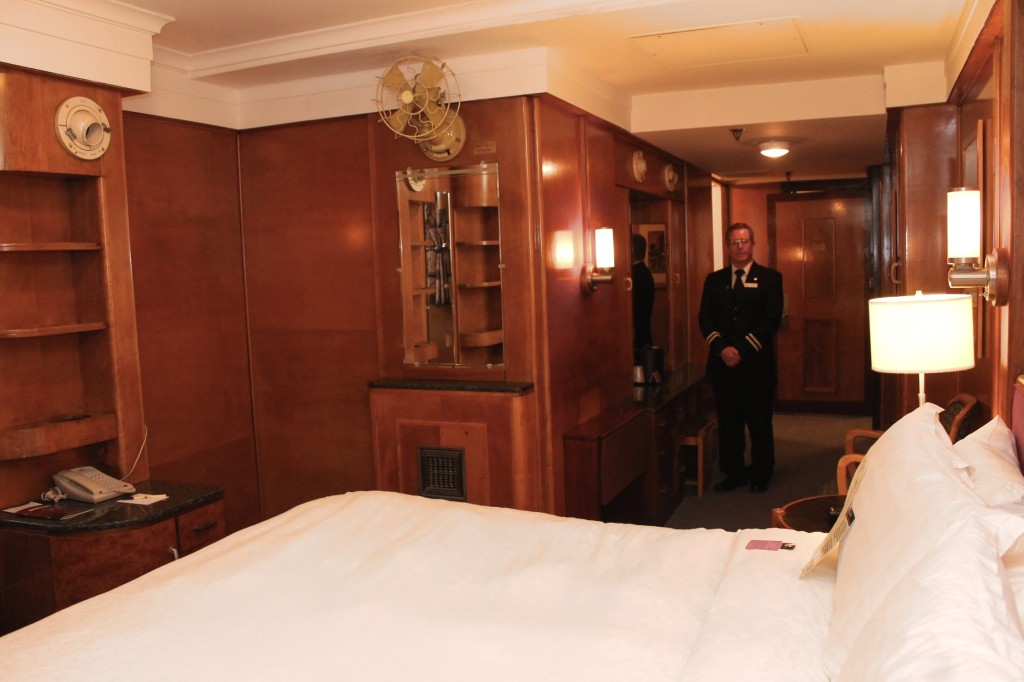 There are a wide variety of tours available from group tours to private tours and self guided tours focusing on everything from history and demonstrations of how the ship works to haunted late night tours.  I had the opportunity to take a personal guided tour that provided a peek into some truly interesting spaces, beautifully decorated and filled with art and detailed wood carvings. My guide J.P., was amazing: his passion and love for this magnificent vessel and it’s history came through as he shared with me it’s history and told me stories and anecdotes about life on the boat.

As we entered what used to be the Cabin Class Lounge, now called the Queen’s Salon I instantly fell in love with the gorgeous details: the makore and maple burr panels, the golden “Unicorns In Battle” panel flanked by alabaster torcheries and the onyx fireplace. To say that they don’t build things like they used to seems to be an understatement here.

As I stood in the center of the Gran Salon I could not help but conjure images of the 1930’s and 40’s, imagine the big lavish parties that must have taken place in this space and think of the lives of all the people who occupied those rooms before me.  The focal point of the room is a decorative map by Macdonald Gill. A crystal model of the Queen Mary would ‘travel’ over the map indicating where the ship was during the transatlantic voyage .

One of my favorite spaces used to be the first-class nightclub and restaurant, a space now used for weddings and parties.  The hand painted murals and golden ceilings gave it so much class and a unique character.

As I finished the tour and walked back to my room I was amazed by the importance of this single ship in history; how it went from being a vessel that was originally built for transatlantic crossing to transporting troops during the war.  My guide told me that by the end of World War II, the Queen Mary transported  more than 800,000 troops, traveled more than 600,000 miles and played a significant role in virtually every major Allied campaign and participated in the D-Day invasion.  It is and believed that this ship shortened the war by more than a year and I could not help wondering how the Queen Mary’s role in the war might have affected it’s outcome.

I entered my King Deluxe Stateroom, located on the starboard side. Through the portholes I could see the lights of Long Beach Harbor. I settled in my bed for the night and looked around at the room with it’s wooden panels, fan and light fixtures and I felt as if I was out at sea crossing the Atlantic on this amazing ship.  Even thought the ship lies still, dry docked, with it’s engines turned off you can still feel it’s power and unlike a building it seems to be alive; the metal structure contracting and expanding, creaking slightly.  As I dozed off I felt like the ship was moving and filled with energy.

Next morning I woke up to the sound of seagulls outside. I opened the curtains and was taken aback by the breathtaking sight of Long Beach’s skyline and boat filled harbor in the first morning light.  I could not help it and as I opened the porthole window I stuck my head outside and took a deep breath, my lungs filling up with the crisp January air as the smell of the ocean filled the room.

After enjoying the moment for a few minutes I took out my camera and could not stop taking pictures.  I finally pulled myself away from this breathtaking view excited about starting my day and exploring the ship on my own.  As I hoped into the shower I was delighted to see the original tub fixtures had been left there, even if they where not working anymore, and was amused by the fact that back when the ship was sailing across the Atlantic you had the option of taking a bath with fresh hot, fresh cold, salt hot or salt cold water!

Before breakfast I wandered around the ship. Guests are free to explore so I walked up and down the various decks and corridors and up to the engine room which looks just as it did 60 years ago.

Dining and Night Life at the Queen Mary

After my morning walk I headed to the Promenade Cafe where I enjoyed breakfast with a stunning view of the Long Beach Harbor.   If you are in Long Beach during the weekend do not miss the Queen Mary’s Sunday Champagne Brunch at the Grand Salon which features more than 50 dishes from around the world and has been named by Conde Nast Traveler as the no.1 hotel brunch in the world!

The charming Observation Bar on the promenade deck offers a lively night scene and live music on the weekends in a beautiful art deco space with a wonderful harbor view.  The space is surprisingly well preserved from the original 1930s construction, and is one of the very few parts of the ship which retains its original function intact, as well as most of its interior fixtures and fittings including the ‘Royal Jubilee Week 1935’ painting by artist A. R. Thomson.

What I love about the Queen Mary 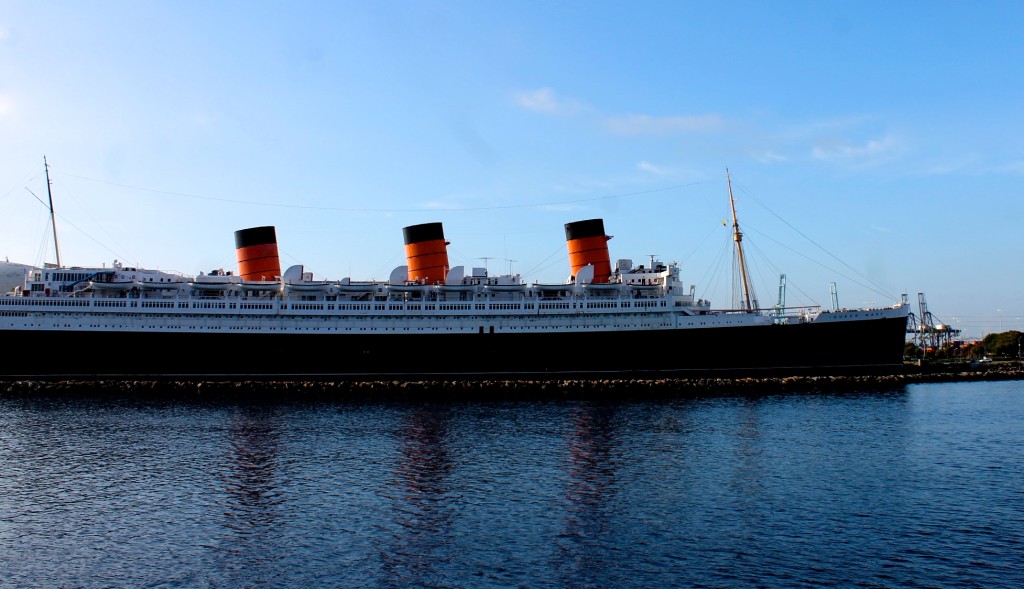 More than a stay at a hotel this experience was all about setting sail back into the glory days of ocean liners without every having to leave the port or without having to climb into a time machine. This opportunity to experience a historic space like the Queen Mary in this way is very rare and to me it was very precious.

If you go make sure to check out my article about things to do in Long Beach.

9 thoughts on “A Voyage Back In Time: Staying At The Queen Mary in Long Beach”