Why is this still big news?

As I am reading yet another article on how bilingualism is beneficial for everyone I wondered why this is still treated like big news.  There are so many people all over the world who are bilingual and multilingual and we are all living with the benefits that come from speaking two or more languages. For us the fact that being bilingual or multilingual gives you innumerable advantages that go from better school achievement to better professional success and include a myriad of other positive consequences is something that requires no explanation.  People who are bilingual do not need to read about numerous studies and experiments but the truth is that a lot of monolinguals do.  Until as late as 1950s research suggested that bilingualism hindered cognitive development and even though this has been disproved over and over again, there are people who still do not know about the advantages of being bilingual.

There are still professionals from pediatricians, to teachers and even speech-language pathologists that tell immigrant parents that their first-generation American-born children should speak only English to ensure academic success.  This is especially true when children are or seem to be showing delays in language development.  Parents who in most cases came to the United States in search of a better life for their children want more than anything for them to succeed and to fit in. Think about it, it make sense:  if your child seems to be behind in his language development or on his over all development or if your child has a disability or a learning disorder learning two languages sounds harder than learning one, right?  So concentrating on only one language, English, is the right choice right?  WRONG! 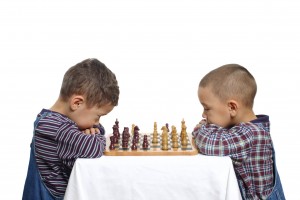 Studies show that children who are Dual Language Learners show cognitive advantages over children who are monolingual from a very early age.  A study by French and Canadian scientists on 63 bilingual 2 year olds showed that they achieved better results on cognitive tests and showed better attention to task than their monolingual counterparts.  Children who are bilingual have also shown to have better language skills in general even showing more neural activity and brain tissue density in the areas related to language, memory and attention. This happens because, simply put, children learning two languages at an early age are exercising these areas of the brain more than children learning only one language.

I consider social emotional competence to be one of the most important skills in both children and adults.  You may have a really high IQ but if your social skills are not good you will have trouble making and maintaining relationships, fitting in and doing well in a job interview.  Recent research published in the book School Readiness and the Transition to Kindergarten in the Era of Accountability about Mexican immigrant families found that these children where more socially and emotionally competent than both their white and African-American peers from similar backgrounds.  I find this to be quite amazing, considering the multiple risk factors associated with Mexican immigrant families.

If you are a parent who speaks a language other than English remember that one of the best gifts you can give your child is keeping you home language alive. If you are an educator, health provider of therapist keep in mind that being bilingual or being a Dual Language Learner is a lot more than speaking two languages. Keeping the home language gives children a better opportunity for success both academically and socially, improves their self-esteem and is part of the child’s identity and heritage.

Learn more about the benefits of bilingualism HERE.