Dash robot is the perfect toy for parents looking for an education STEM toy for children that will teach them coding in a fun way. 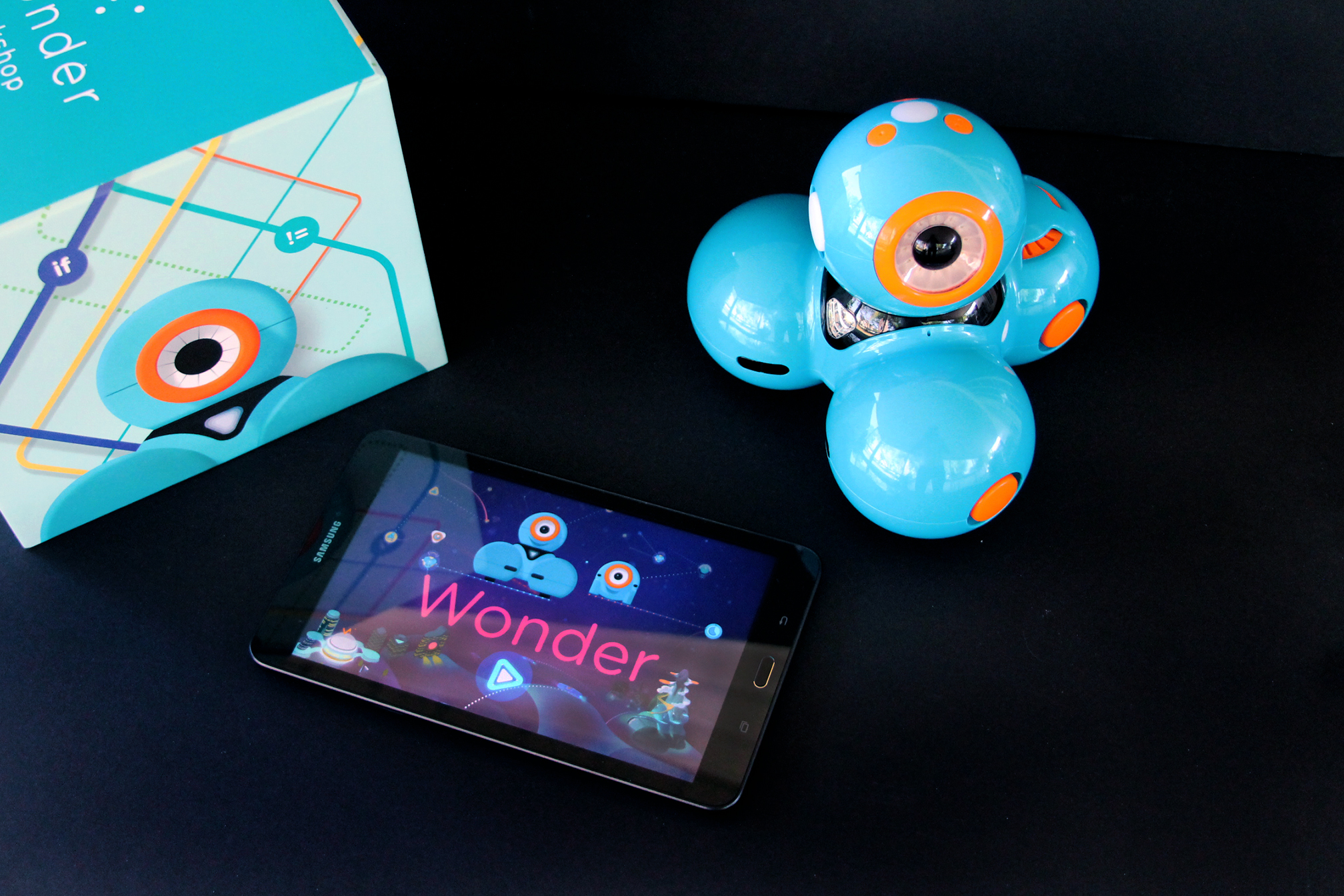 One of the most fun parts about Dash and what really sets him apart from other similar toy robots is not only that fact that he is very easy to program through Blockly and Wonder apps but that he is responsive to the world around him and to your child. That interaction with you child and Dash’s personality which makes him seem come to life make him not only a fun educational toy but there is an instant emotional connection that makes Dash more of a robot buddy or pet.

My whole family fell in love with Dash the minute we turned him on. He really seems to come to life as he looks around his environment and recognizes people. One of the first things you are asked to do as he wakes up and come to life is to choose a personality for him which we thought was awesome as this really let’s kids personalize Dash from the start and let’s them find a personality that fits with theirs. 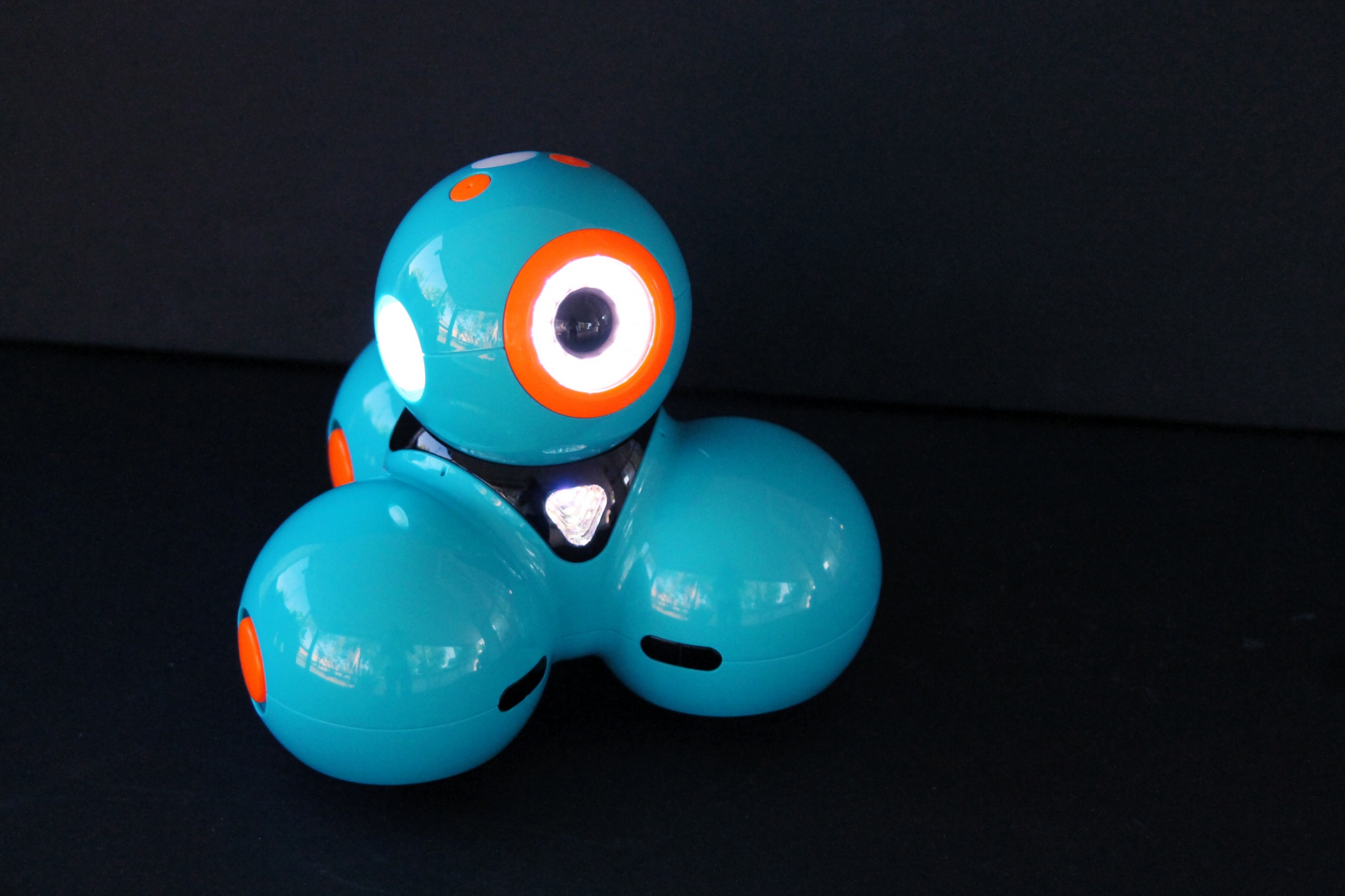 Dash comes with hundreds of exciting coding adventures and projects available in Wonder and Blockly apps. You can use Apple or Android phones or tables to program Dash to do anything your child could desire from recording his voice and dancing to following him around and reacting to voice commands. Because both Blockly and Wonder coding languages are so easy to use and intuitive kids can start coding immediately and there is not really a learning curve. As the kids complete different coding challenges and tutorials they can move on to other harder ones and start creating their own. They are learning to code without even being aware of it. Like any new language when kids starts coding t a young age they quickly pick this new language up and after a while it just becomes second nature to them. Being able to code at a young age will not only give your child a huge advantage by letting him the tools to create and makes his own ideas a reality through programming but it also trains the brain to understand how things work and are created in this digital age opening up your child’s curiosity and opportunities for learning. 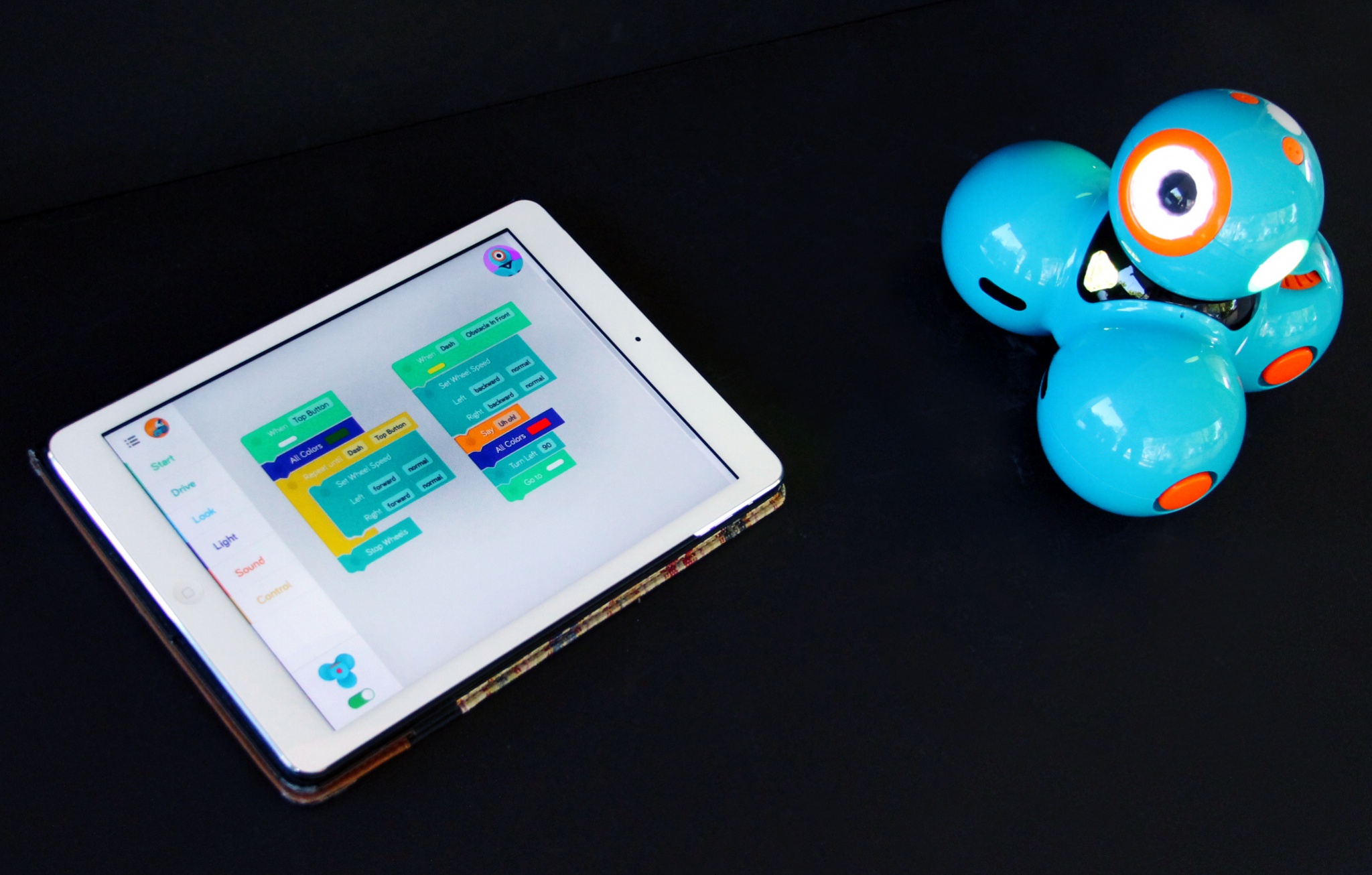 My 8 year old son has been using Blockly to code and create different games on a tablet for a while so he was familiar with it but taking that to the next level and being able to use coding to tell a little robot friend what to do was very exciting to him. He started off using the challenges that Dash provides and tutorials but soon moved on to programing Dash to do other things on his own.

I really love that Dash does not require batteries; which are such a hassle, so expensive and are not environmentally conscious. You just have to plug him with an USB cable (included) to charge him and he comes fully charge so he is ready to be played with right out of the box. 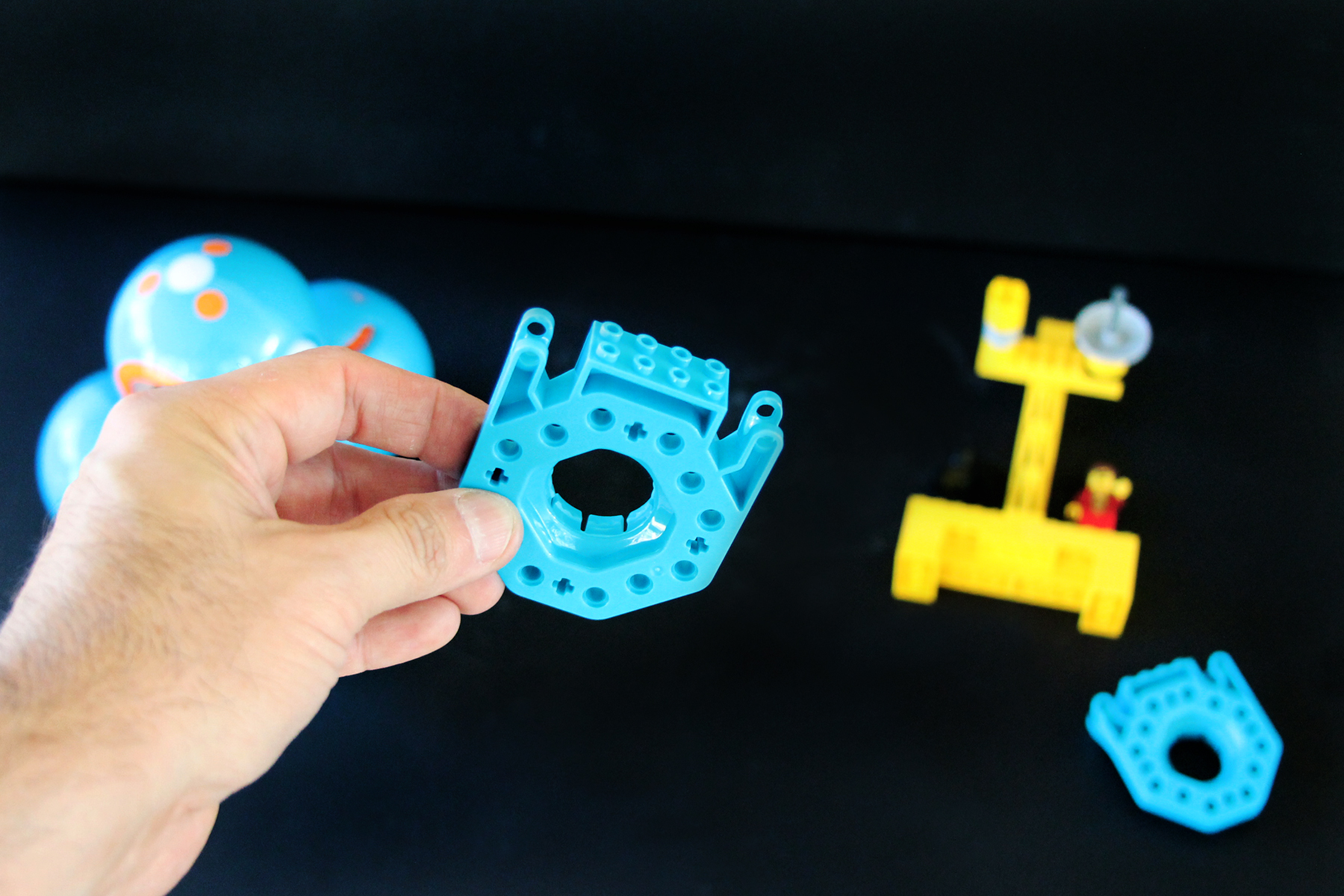 Like many boys his age my son is a huge LEGO fan and loves to build so the fact that Dash comes with a Building Brick Connectors to extend play with LEGO® and LEGO® Technic compatible bricks letting kids add fun LEGO® creations onto Dash was a huge plus for us. My son will spend hours creating space stations or war machines for dash to carry around along with LEGO® mini figures who fearlessly ride him around the house chasing our dog. 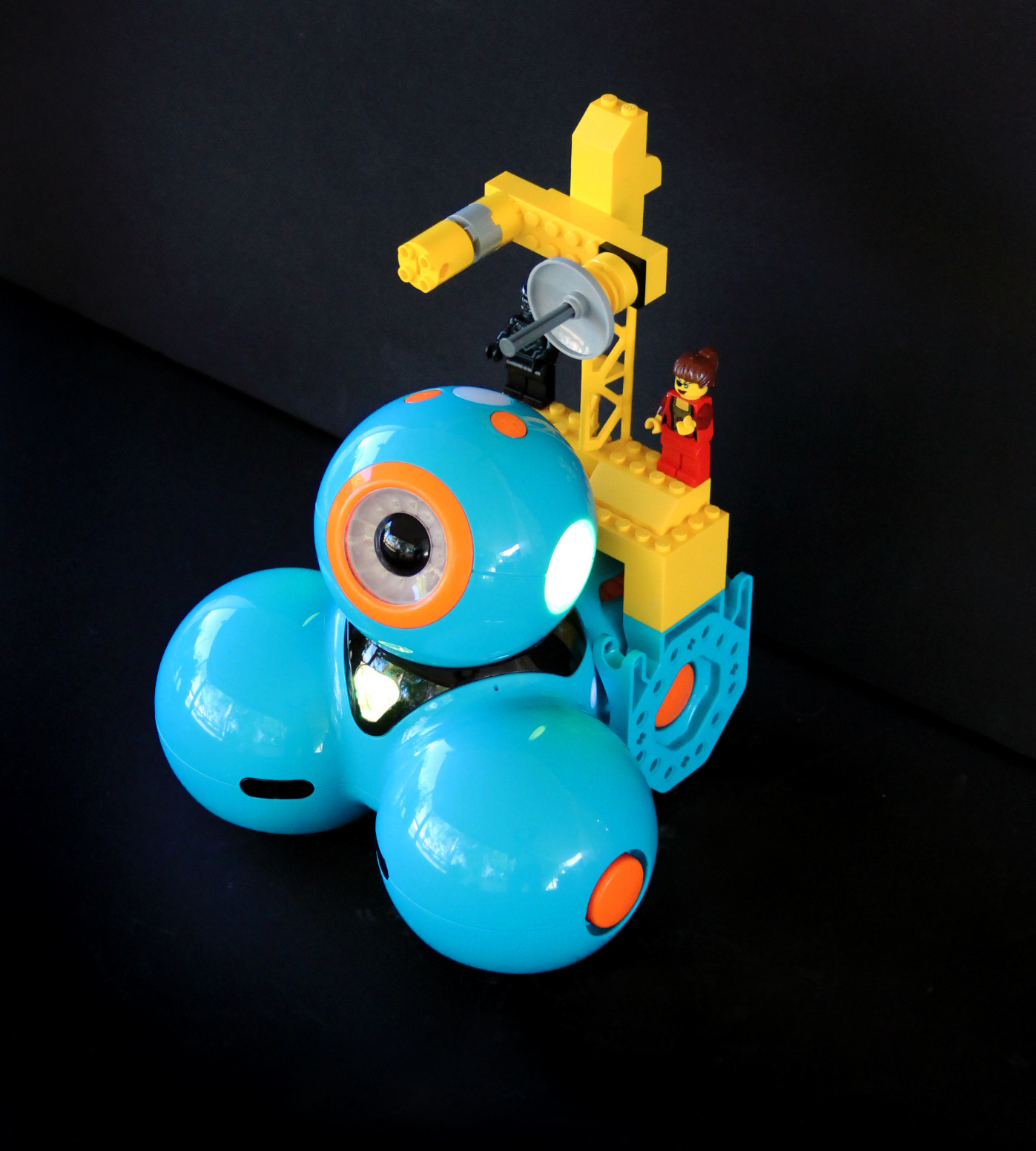 You have the option to expand Dash’s capabilities even more through accessories like the Dash which you can purchase online,among them Dash’s launcher. You can also acquire Dash with it’s companion robot Dot which was not included with our Dash but you can buy Dash and Dot together if you want to, which I would highly recommend. Together these two little robots a loads of fun! If your budget allows it I would highly recommend getting the Dash and Dot Wonder Pack which includes Dash and Dot along with lots of accessories including a xylophone, the building blocks connectors and the launcher.

One of the most fun parts about Dash and what really sets him apart from other similar toy robots is not only that fact that he is very easy to program through Blockly and Wonder apps but that he is responsive to the world around him and to your child. That interaction with you child and Dash’s personality which makes him seem come to life make him not only a fun educational toy but there is an instant emotional connection that makes Dash more of a robot buddy or pet.

Although my son is obsessed with robots and loves coding already Dash is a great toy for kids (and to be honest adults too) of a wide range of ages and coding levels. My son is 8 and he could easily have started playing with Dash two years ago. His ease of use makes him a great option for kids who have no previous experience in coding and kids who might not even be interested in coding but just want a fun toy robot. Kids will learn coding through play and through really fun interactive and engaging activities and apps that provide countless hours of educational fun. This toy is not just lot’s of fun but it encourages kids to really explore the world of coding, problem solve and create and it’s the most fun my son has had with a “robot” so far.

If you are interested in getting and educational STEM toy for you child that will introduce them to and get them excited about coding (or expand their knowledge) Wonder Workshop’s Dash robot would be my first choice. And right now Dash is only $124.99 on Amazon down from $149.99!

19 thoughts on “Dash Robot Review: A Robot Toy For Kids To Learn Coding”